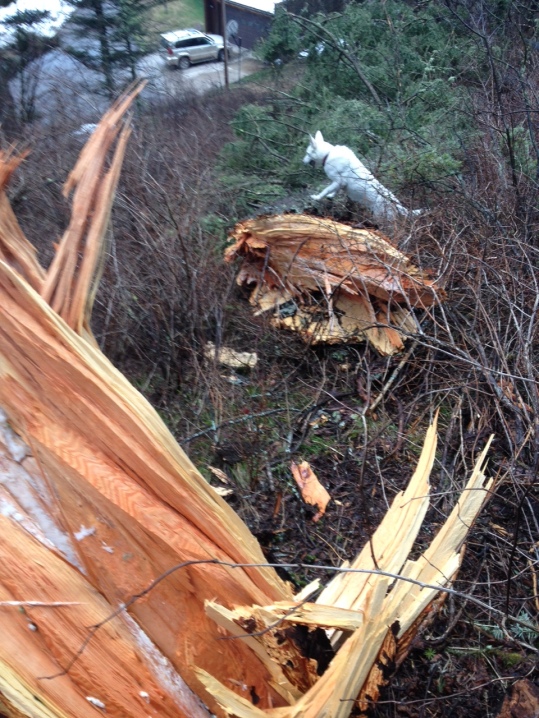 The forecast stated rain this morning. I was just hoping it was wrong. Dressed for a hike I headed out of the canyon where I live to more reliable weather. But the rain was already there. I turned back toward home as the rain followed slowly behind. Across the bridge with the creek raging snow melt below, past the arcs of snow that remain in the yard. Tennis balls lost in the snow to Noel over winter are emerging like little bright green treasures. We find a few and I throw them to her while watching the heavy sky above move closer to my head.

I have learned this past winter that  wind can be fierce in the canyon. We had some nights that I even wanted to crawl into the closet in the basement. The large Douglas fir trees and others that surround the house are close to 100 feet tall. I took stock of them last fall after I lost the top of one of them that lives so close to my house. Immense and powerful. The steep hill behind my house is all forest with heavy underbrush and I realized as the snow began to melt and I was spending more time outside that one of these great trees had fallen behind the house. Seems like a good time to explore the tree and experience just how big it was.

It had twisted and broke during one of the storms and the stump that remained was taller than me. I can see as I get closer that it had split and twisted vertically in two locations. The base was so large its difficult to imagine it giving way to the wind. But there it lay long and broken down the hillside pointed toward my house. I paid homage, I feel its bark, its skin, and appreciate the needles that remain green on the trunk that now lays on the ground. Heading back down the hill I follow the narrow deer paths that lead to one of the largest trees at the bottom. Exposed roots make me wonder how long it will live against the wind. This spot, behind the tree, has some collected garbage, things that must have come from the neighbors trash. And now I realize why this spot always felt a bit spooky to me in the dark of the winter night. Teeth holes in the plastic  milk carton tell me something has been there. Something large –  an animal – I heard moving up there this winter – has spent more than a passing moment at that tree. This tree has had a long life, including the  2x4s that remain nailed into it’t trunk. 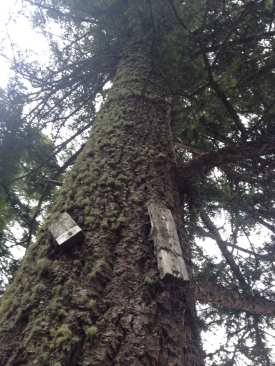 I look out at the forest. The rain has arrived and falls like a morning in the Northwest. Light but constant. My hike will wait for now. I will wait, and instead watch the male robin who has been sitting on the deck railing for the past few days expressing his dominance to the reflection in the glass window that separates me from him.

“Blue crosses Orange” from the Four Directions series. It may be frigid outside, but doors will still be open for my Pop-up sale today in Livingston if you want to stop in. 1-3pm. At my design studio -112 W. Callender Street in Livingston.
-16 degrees. Still, and Sunday morning.